A few days ago, Jason and I went out to dinner at a small cafe nestled below large trees in Los Angeles called Alcove. It was a serene space hidden within a non-stop city. We had spent a long, fun, rainy day at a local amusement park and were eating a last meal together before heading back to my house of kids, pets, and busy life. We chatted about the day, the weather, and the menu; then the discussion became more serious. We reflected on our relationship. We marveled at the progress we have made. We praised the outpouring of support we have received. We acknowledged the opposition we have faced. In five months, I’ve watched Jason transform from a loyal friend, to a doting boyfriend, to a devoted father-figure for the children. He has become increasingly more selfless and has repeatedly shown his commitment to our family. He shows up at my house early every morning, sees us off to our day, and then stays late each night to make sure we’re safely in bed before he drives back to his place. He has watched me grieve deeply. He acknowledges that Simon was and is always a part of this family. He has stood by my side when the tears came at inopportune moments. He has listened for hours and talked for hours. I can’t leave out the fact that we have huge amounts of fun together, too.

Jason and I were not afforded the luxury of a standard dating relationship. I was married to my first love for 10 years before cancer took him away much too soon. Three children have been left without an earthly father. We both knew we had to be intentional if we moved forward. We went to counseling, got our parents involved, and prayed like crazy. Moving toward marriage would not just mean husband and wife. It would mean him becoming a father. It would mean loving a widow who will always grieve her loss. It would mean always honoring Simon. It would mean the kids, pets, house, and jobs would happen instantly while leisure time together would be squeezed in wherever possible. While most couple do all their dating in the beginning, we are going to be dating for years since life is already happening at full speed.

During our thoughtful conversation at that little corner table, Jason asked how I would want to be proposed to when the time came. We were in agreement that no flash mobs, professional videographers, or rooms full of family members yelling surprise were needed. We already have a crazy, amazing story. I said he just needed to buy a ring, preferably a big one (hey, just being honest), and ask. He nonchalantly replied, “Then how about this?” He pulled a small, wooden box out of his pocket and set it in front of me. I wasn’t sure what was happening at that moment so I asked where he got the box. He said he had picked it up in Costa Rica years earlier for his future wife. I thought that was adorably romantic but was still not connecting why he was giving me a box. He is used to my blank stares so he took the helpful route and opened the box to reveal a gorgeous engagement ring. Then he asked me to marry him.

Of course I said yes. No hesitation. For those who care about details, he had ordered the ring a month into our relationship. Jason had shown me a picture of a ring when we first started dating just to see what I thought about the style. I loved the general look but there was a design around the band that was too similar to my first ring. I described the modifications I would want in hypothetical terms since he wasn’t actually buying a ring yet. Except that he was and I didn’t know it. He had the diamond upgraded and had the jeweler make the changes in real life that we had discussed in theory. It’s perfect.

Here’s one of my favorite parts of all this. When we were still just friends, deciphering our feelings and whether we should move forward into a relationship, the same song kept popping up everywhere. Like, seriously everytime we got in our cars or would listen to music. It was uncanny. The lyrics are about sticking through hard times, grabbing each other by the hand, leaping through a waterfall, and yelling Geronimo! Bombs Away! It seems like it has been an analogy for our complex, playful, and beautiful relationship. Taking risks for the reward. Going for it without regrets. As I was ogling over the ring shortly after accepting his proposal, I noticed an inscription inside the platinum band. 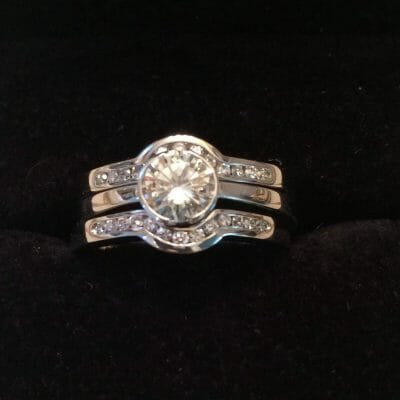 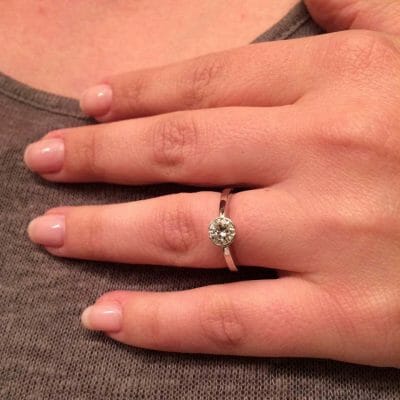