(This is the second post in a short series of crazy things I’m fessing up to that did in my younger days so my kids don’t think I’m the most boring mom on the planet.)

Back in May 2001, my older brother drove me back to California from Texas after a semester exchange. (That exchange is how I met Simon, by the way. If you’re new to the blog, you can read about that here). We stayed in Pecos, Texas the first night.  Say what you will about that town, but it was creepy and smelly.  I hear there’s a cantaloupe processing plant responsible for the smell, but that may just be lore.  Anywho, my brother was trying to put the smell into words.  The whole town reeked. He finally concluded it smelled like “donkey balls”.  I know, a highly inappropriate visual picture.  But I wholeheartedly agreed and also committed myself to one day smelling donkey balls so I could confirm our suspicions.

The following summer I volunteered as a youth leader and embarked on a week long adventure of camping and river rafting with junior highers in Northern California. One early morning, as we were all huddled in a mass of sleeping bags on the dirt in the open air, a fellow leader and I awoke to a strange animal sound I wasn’t familiar with.  It was still dark out but we couldn’t go back to sleep. This animal was whiny and persistent.  The other leader had spent years living in a more rural area than me and concluded it sounded like a donkey.  She was also familiar with my year long quest. The light bulb went on.  This was it.  It was time to smell some balls.

Frantic preparation began.  Snacks for the alleged donkey were gathered and I dressed in dark clothing knowing I may have to break in to whatever pen it would be housed in to catch a whiff of its undercarriage. We worked with ninja-like precision so the children wouldn’t wake up. We didn’t even tell the other leaders where we were headed, with intentions to return before it was light. We grabbed the video camera because the best part of getting in to trouble is having evidence (terrible logic, right?!). We left the camping site and stealthily jogged down the two lane road, following the jumbled hee-haws until they got clearer and closer. Then, down a steep driveway, we spotted not one but TWO GLORIOUS DONKEYS.  Locked in a pen. In a private backyard.  Behind a large home. The adrenaline was coursing through my veins. There’s no way I was backing out now.

Armed with a head of lettuce (because I had no clue what donkeys actually eat), I start to jump the fence.  A porch light turns on and the homeowner storms out of her back door.

“What on earth is going on here, ladies?”

I stumble over the words and create a white lie as I explain that we’re from Los Angeles and I have always dreamed of petting a donkey and that donkeys don’t exist in the city. And that we were videotaping it all to show our other donkey-less friends back home. The owner inspects us for a few more awkward moments then goes back in her house. Knowing the town is too small for us to escape law enforcement, we wait, figuring a call to the police was happening.  To our amazement, she returned with a bowl of apples and carrots, explaining that donkeys don’t care for lettuce. Then proceeded to tell us her husband was the police chief and town mayor. And that us “city girls were so sweet and deserved to pet a donkey”. THEN YOU GUYS, SHE ESCORTED US IN TO HER BACKYARD!  WHO DOES THAT?!

The caveat is that there were two donkeys, a male and female, and the owner was so talkative, we couldn’t get her to tell us which one was the dude. She rambled on with Donkeys 101 and was trying to engage our full attention. I couldn’t sneak away from her or casually bend low enough to differentiate which critter was packing the testosterone. Finally, I made up some nonsensical question about the curvature of their tails and I squatted fast and hard to determine who was rocking the balls and catch the scent I had been imagining for over a year. Sweet mother of mercy, It. was. wretched.  I had to gasp for air. It was everything Pecos had smelled like confined to a few square inches. The donkey balls analogy was alive and real.

This story gets more unbelievable.  This lady gives us, the two creepers who were breaking in to her property 15 minutes earlier, a permanent invitation to come back and visit whenever we want. She even walks us over to her back gate to show us how to access the donkeys again from our campsite. We break in to your backyard, you invite us to be your best friends.  I don’t get it but it sure beats a multitude of other scenarios that could have played out. We ran back to the campsite heroic and in total hysterics.  We could hardly get the words out as we told the others what had just transpired.  If those junior highers weren’t so scrawny, they would have paraded us derelicts on their shoulders. 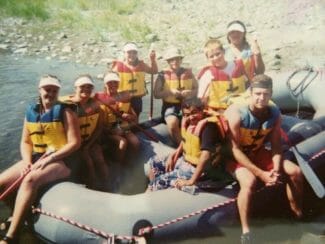 My accomplice and I on the left.  I am proud to say we keep up with most of these kids (now adults!) to this day.  I mean, after that kind of bonding, it’s kind of impossible not to. Oh, and the accomplice married the other leader on the right.  Can’t give credit to the donkeys for that, but it may have helped seal the deal.