The Best Man and Brunches

My son and I just returned from Dallas. This was my fourth trip to the Lone Star State in four months. Our reason for being there was intense: Simon was supposed to be the best man in his best friend’s wedding. The same best friend that introduced us nearly 14 years ago. The same friend that stood beside Simon in our wedding and later held each of our babies and then watched Simon be laid to rest. We had purchased the tickets for the wedding in May, never thinking Simon wouldn’t be there six short months later. Go ahead and grab some tissues. I’ll wait. I’ll even recap the rest of the trip first before you cry your face off like I did.

I had rented a car and was already getting nervous about navigating the ever changing downtown Dallas infrastructure while keeping an eight year old happy. A longtime friend of mine and Simon’s knew we were coming to town and offered to drive us around wherever we needed to go. If I haven’t already said it a million times, we have the best friends in the world. THEE. BEST. And I hope I can say that a million more times in this life. We arrived Thursday evening. Our friend picked us up at Love Field airport and gave up his bed so that my son and I wouldn’t have to deal with a late night, blurry eyed hotel check-in.

On Friday morning, we visited a couple that was in our church small group in Carrollton, TX during our first year as newlyweds. They are those friends – the kind that you pick up with where you left off whether it has been five minutes or five years. Career changes, babies, and new houses don’t change this friendship. It makes it richer. We lingered over delicious food and meaningful conversation peppered with random questions from our sons about dinosaurs, cars, and legos. They have a three month old daughter that I happily snuggled. I love them newborns.

Our driver (I just like calling him that, makes me feel way more important than I am!), who is unbelievably patient, then drove us to the mall so I could visit some of my favorite department stores that aren’t in California. I forget how friendly the employees are when generally compared to California. I had to peel myself away from a few who just wanted to chitter chat all afternoon long. I love Texas. *sigh*

As evening approached, we were dropped off at The Fairmont Hotel in the heart of downtown Dallas. Simon’s family had gotten tickets to a Christmas show at nearby church. We had rooms on the 16th floor with a spectacular view of the city, the sky, and the sunset.

I snapped a selfie in front of one of many perfectly decorated Christmas trees in the lobby.

The show was excellent but my son fell asleep within the first 10 minutes. I kept joking with him afterwards that he owed his grandparents for cost of the ticket. By the time we arrived back at the hotel, we were wide awake and very hungry. Room service was the only option, so I ordered what I hope was the most amazing $20 grilled cheese my son has ever consumed. Since I was already spending a small fortune, we decided to live it up and add fries, a cheese tray, hot tea, milk, and cookies. It was delivered royally, with full place settings, imported honey, and little touches of elegance, like mesh over the lemon for the tea. We don’t usually spend money on things like that, but breaking frugality once in awhile for a special memory is priceless.

We joined Simon’s family for an equally elegant breakfast in the morning. While it is still seems unreal that he is absent, his family IS my family. That won’t ever change. Our kids are extensions of this lineage. Our son falls alseep on long car rides just like Simon’s dad. Our middle daughter has a generous and sentimental spirit like Simon’s sister. Our youngest is so smart and observant like her uncle. And Simon’s mom and I were discussing how much we enjoy luxurious things, like well appointed hotels and fancy breakfasts. The meal ended with the headliner from the concert, Steven Curtis Chapman, dining at the table next to us. I don’t get too starstruck after all these years in California but Simon’s grandfather took one for the team and said hello. Steven was very polite and charming for any curious fans out there.

We spent the remainder of the morning lounging in the terrace together, enjoying each other’s company and watching my son enjoy having the large, heated pool all to himself. 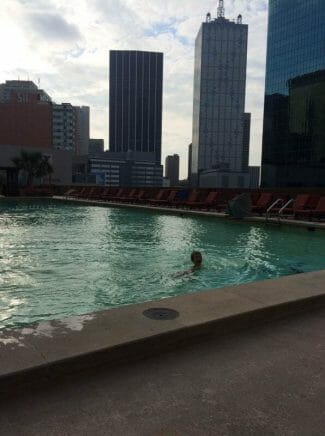 Our driver picked us up and we went out for late brunch. Texas is loaded with amazing places to eat and it would be a disservice to my belly to not take every opportunity to partake in the regional cuisines. I had biscuits with maple sausage gravy topped with sunny side up eggs. YES PLEASE. After a quick nap, we headed toward the wedding venue. I had checked the location on a map and realized it was 0.2 miles from the hotel Simon worked at when we got engaged and during our first year of marriage. One of the managers still works there and insisted on giving us the employee rate. I had anticipated the hotel being a trigger for me emotionally but I was flooded with warm, happy memories instead. I feel like that is happening more and more these days. And I know it’s what Simon would have wanted.

Our sweet friend, L, was my date to the wedding. She has known Simon and his best friend longer than I have. She is the perfect mix of fun and support. She knows where I’ve been and where I want to be. We arrived at the venue and seated ourselves for the ceremony. The wedding coordinator found me and said that the groom wished to see me. I found him waiting with a bouquet. For me. I was still holding it together fairly well at that point. 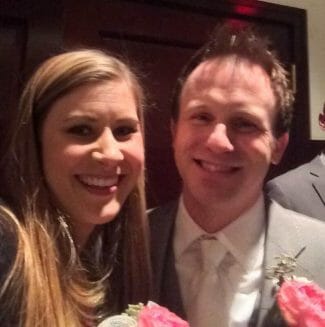 I returned to my seat and opened the wedding program. 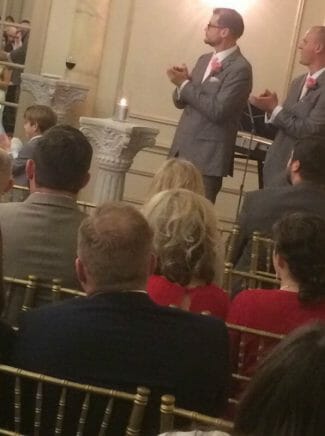 Once seated at the reception, the wedding coordinator had the candle delivered to our table. It was so touching. And I can’t lie when I say that we also had some fun with the idea. We asked Simon if he was enjoying the chicken and if he would dance with me later. Yes, humor is one of my coping techniques. It’s a little unorthodox, but so was Simon. 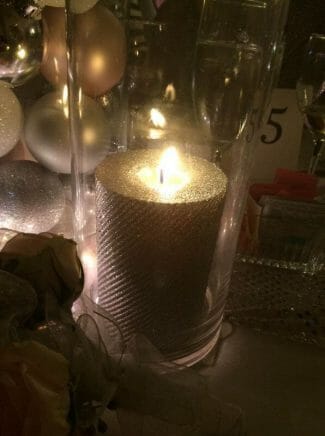 We were thinking about calling it a night when the DJ announced the bride had a surprise for the groom. Just days before Simon passed, the bride had contacted me about recording a best man speech. Simon was hardly awake at that point, but we were able to get about a minute of him professing his friendship and admiration for his best friend. He ends the speech saying he loves him. It was emotionally painful for me to record and physically taxing for Simon. I hadn’t thought much about it until the bride handed the groom her phone to watch and the DJ patched in the audio for the rest of the guests to listen in. I couldn’t hold it together at that point but frankly, neither could anyone else. And I was so glad for that one minute. On his darkest days and in his highest highs, the best friend will know and have proof that Simon loved him like a brother until death.

A group of us rounded out the evening with drinks and late night conversation as we all cozied up by the fireplace in the hotel lounge. Our friends have been my lifeline. They help my soul feel alive and remind me that this journey was not meant to be taken alone. They engage me in healthy dialogue instead of spewing unsubstantiated advice. It sounds so cheesy but I really feel like they are always right beside me, propping up my wings so they can help me fly.

Those same friends met us for one final brunch Sunday morning before our flight back to Los Angeles. Well, first I had to let our son swim in the hotel pool while it rained.  He can’t say no to water.

We sipped coffee and mimosas in the intimate corner restaurant with natural light streaming through huge windows while the rain poured outside. In between bites of quiche, fruit, and french toast, I literally said out loud, “This is it. This is how life should be. Taking it all in with friends and with those you love. It doesn’t get much better.”

As we headed to our cars, our friend L whispered, “It’s so good to see you happy.”